There seems to be a deluge of cheap toys in my house, thanks to the kids. But on the upside, many of these have interesting electronics that are perfect for little hacks. I wanted to make a quick birthday gift for my wife, and I remembered that I had stashed away this particularly annoying toy (a cycle bell?) that sang “Happy Birthday” continuously in an ear-shattering tone. So I decided to make a birthday greeting box out of it. Here’s what the ear-shatterer looks like, outside and inside. 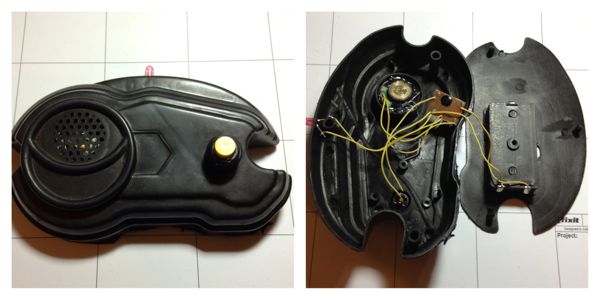 So it consists of a “black box” IC, which is connected to a push button and a 3V battery box, and has outputs for a speaker and an LED. After making a little sketch of the connection, I desoldered all the wires, and cut off the hot glue to extract the speaker. The wires were really flimsy and the soldering, connections etc. were clearly done by an “I hate my job and want to shoot my boss” kind of employee.

For the box, I used the unused case for my wrist watch (also unused). I wanted the music to be triggered when the box is opened. I’ve done something similar before that earned me my “5 minutes of fame” on hackaday and lifehacker. So I decide to take the same approach here - use a MOSFET and a reed switch. The scheme is shown below.

The high resistence (1 Mega Ohm) ensures that the current drain when the box is closed in really small - which means more battery life. When the box is closed, the reed switch is closed, the gate of the MOSFET is grounded, and it doesn’t supply power to the circuit. When the box is opened, the reed switch opens, and the MOSFET turns on, supplying power to the screamer. By design, the push button triggers the music on for each press. But since I want an on/off type of system, I just shorted the push-button connection, and connected the circuit’s power supply across VCC and the drain of the MOSFET. The magnet, fixed to the top flap of the box, was stolen from the kitchen refrigerator. (I can’t resist magnets, so I keep buying this junk at every international airport I pass through.) I also replaced the red LED with a cooler blue LED. 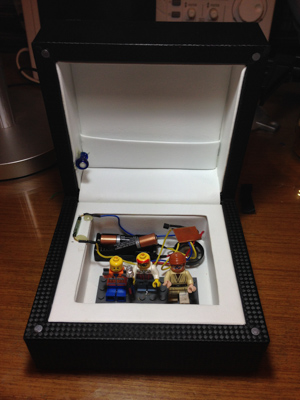 Now for some personality. My son helped me find three LEGO figures to represent our team - construction worker, pirate (?) and Obi-Wan. Pirate is holding the blue LED, which flickers in sync with the screeching. And the box had the perfect slot for a Greeting card. Here is the completed masterpiece (you can see it in action at the YouTube link on top of the page): 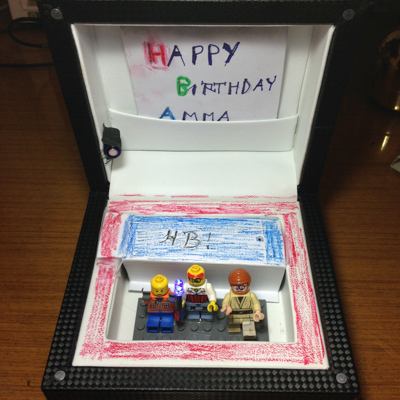 I am never throwing broken toys away. ;-)