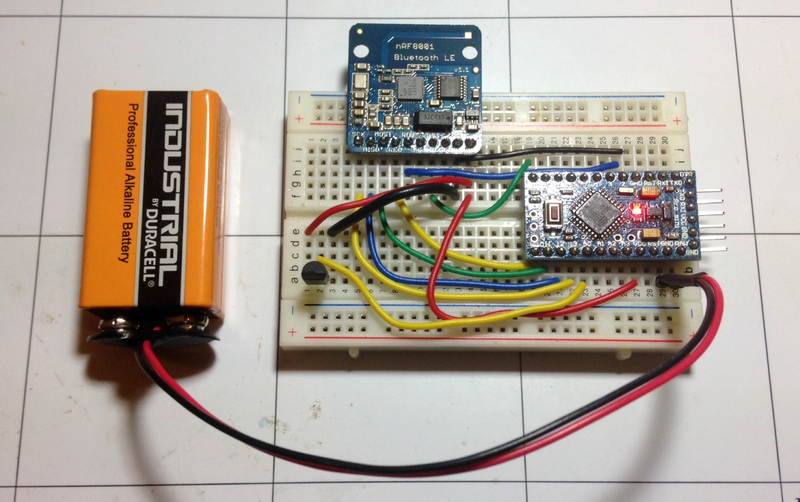 Internet Of Things (IoT) implementations usually consist of three parts - the device itself, software that interacts with the device (which usually runs on a mobile platform), and a cloud part that can serve as an intermediary, which may host web apps for controlling the device or dashboards for device data. In this three-part article, I demonstrate an “IoT triad” by developing a simple Bluetooth Low Energy (BLE) device, a cross platform mobile application, and data visualization on the cloud. In this first installment of the project, I will focus on the device part.

Our IoT device consists of an Adafruit nRF8001 breakout board controlled by an Arduino Pro Mini (clone). It measures the ambient temperature from an LM35 sensor connected to analog pin of the Arduino, and sends out this information to connected BLE peers. In addition, it also broadcasts a (fake) battery level to listeners. Here is how we hook up the device: 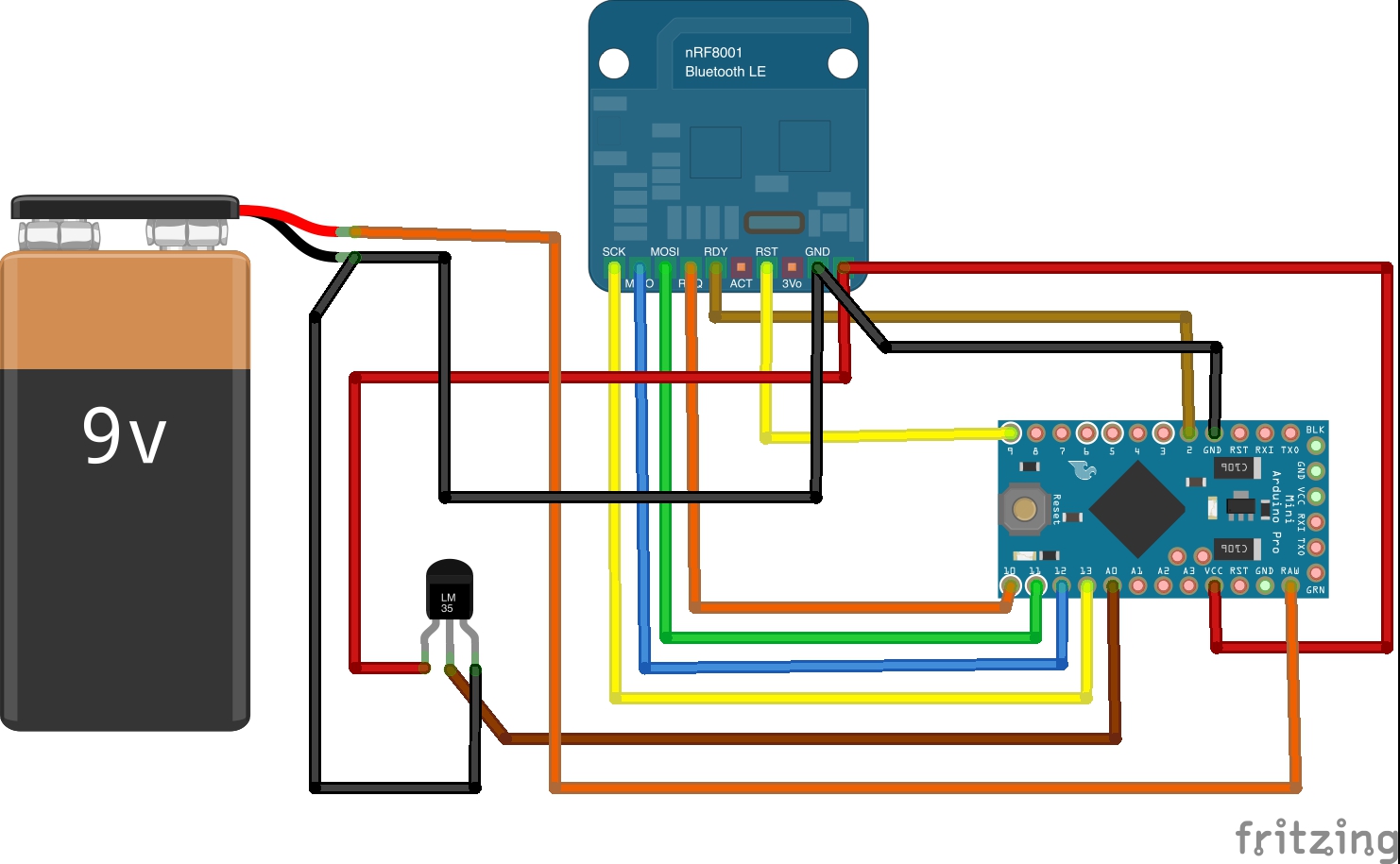 The connections above are same as that in the Adafruit nRF8001 article. (Note that we’re using a 5V Arduino.) REQ connects to the SPI Chip Select pin, which is set as Digital 10 here. RDY is the interrupt out from the nRF8001, which is connected to Digital 2 (It needs to be connected to an interrupt capable pin). RST connects to Digital 9, and is used to restart the nRF8001 board when the Arduino starts up.

Now, we need to develop the firmware for our IoT device. The BLE magic happens in the nRF8001, and the Arduino acts as a controller for this chip. The communication between the nRF8001 and the Arduino happens via something called the Application Controller Interface (ACI). This scheme is shown below.

Note that there is one extra connection above than the usual SPI scheme. (This is because the nRF8001 doesn’t act as a pure SPI slave device.) The controller and the nRF8001 communicate in a bidirectional scheme. Information going from the controller to the nRF8001 are in the form of system commands and data commands. Information going the other way is in the form of system events and data events. For the gory details, you can (and you must!) read the 161 page nRF8001 data sheet. Luckily, we don’t have to code everything up from the data sheet ourselves. Nordic has provided an excellent SDK for the Arduino with great examples which we can build upon.

Before we can use the nRF8001, we need to configure it. Nordic provides a Windows-only (why Oh why?!) nRFGo utility that can be used to generate the files needed to configure the GATT and GAP settings as well as other hardware settings for the nRF8001. If you are unfamiliar with these BLE concepts, I recommend that you start reading Getting Started with Bluetooth Low Energy by Kevin Townsend et al. (BLE has a tonne of acronymns and concepts, and if you’re like me, it will take multiple readings for the dust to settle.)

To get started, we have to first decide what kind of services our BLE device is going to provide. In our case, we want to send out temperature out (measured by the Arduino using the LM35), as well as a fake battery level. The BLE specification describes a number of standard Services, and we’re going to make use of a couple of them. For sending out the temperature, we will make use of the Health Thermometer Profile. This service specifies a number of characteristics, but we’ll make use of only one that we’re interested in - Temperature Measurement. For battery level, we’ll make use of the Battery Service profile, and the characteristic of interest in this case is Battery Level.

Nordic uses the concept of Service Pipes for the nRF8001 ACI. Each service pipe points a unique charactacteristic - for example, the Battery Level as in our case. The pipe also defines the direction of data transfer, and a bunch of other properties. When we configure the nRF8001 using nRFGo, it will create the definitions required to create these pipes in services.h.

The way we use nRFGo is as follows:

For the Health Thermometer profile, we have only included the Temperature Measurement characteristic. In its properties, we have checked the Indicate option, which means the following (from nRF8001 data sheet): 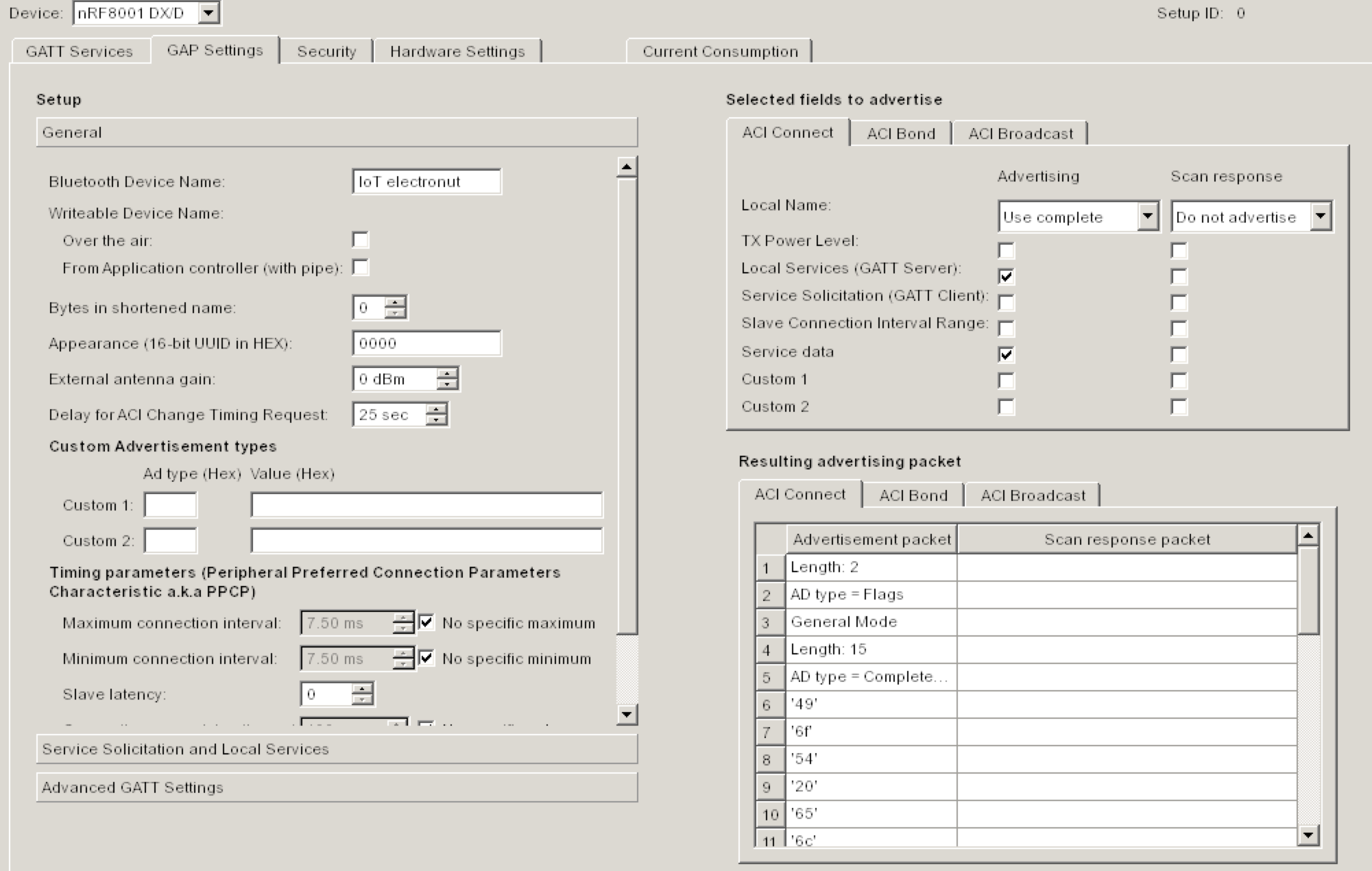 In the GAP Settings tab, I have set the device name as IoT electronut. I’ve also set values in the ACI connect/bond/broadcast tabs. This is something you can play with - I am yet to get too deep into these. To see and modify the settings I used above, simply load the arduino_nrf8001_iot.xml file into nRFGo from my github link for the project.

At the end of the above process, we end up with a services.h file that we will use in our project. (nRFGo also generates a services_lock.h, which is to be only used for production, since that will write the settings permanently into the non-volatile RAM of the nRF8001.) If you look inside the services.h file, you will see stuff like:

The above three pipes match our settings in the GATT tab in nRFGo. These pipe handles will be used in our code. The services.h file also contains the initialization code containing all our settings. This looks something like:

To be clear, you don’t absolutely require nRFGo to make all this work. As long as you are able to send the correct initialization commands to nRF8001 via SPI, it will work. But as you can imagine, coding this up manually would be horribly painful.

Here is the Arduino code that uses the information in services.h to setup the nRF8001:

In the code above, we can see how the Nordic ACI library data structures are set up according to the configuration we created in the services.h file. The code also sets the microcontroller pins used to communicate with the nRF8001, and finally calls lib_aci_init() to initialize it.

The nRF8001 is state machine with the following four modes of operation: Sleep, Setup, Active, and Test. The following graphic illustrates how it switches between these modes. 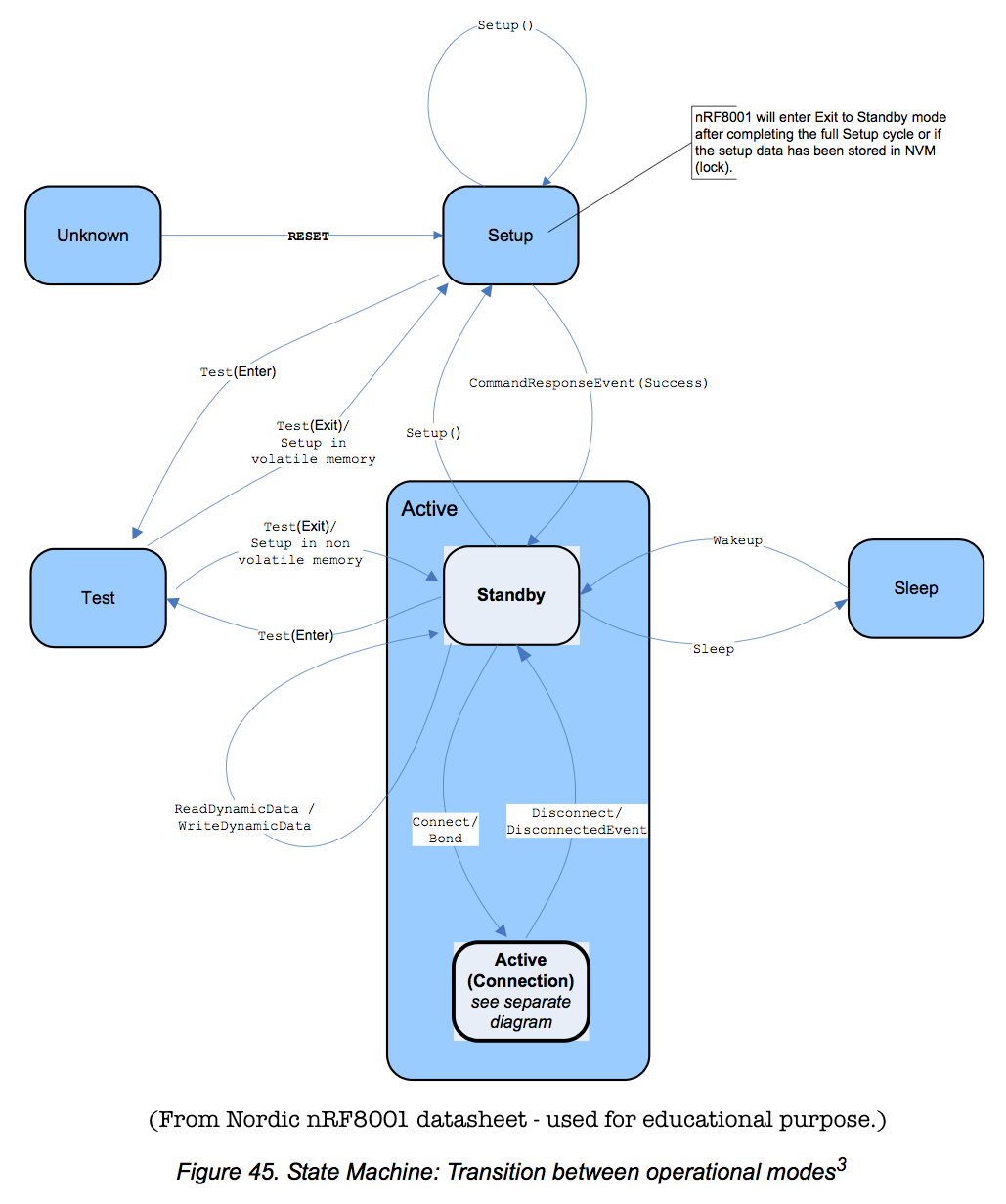 Here is the boilerplate code from the Nordic BLE SDK, which manages the event loop in the nRF8001:

So the aci_loop() method above handles the event loop in the nRF8001, and we need to add our code to specific event handling sections within this code. This is how we integrate aci_loop() into our Arduino code:

We measure temperature using the LM35 sensor, which is connected to the Analog 0 pin of the Arduino. Here is code that calculates temperature from this sensor:

Now let’s look at how the data is sent to BLE peers.

Before we send the data, we need to make sure that a peer has notifications turned on. This is done in the ACI loop:

In addition to temperature, we’re also going to send a fake battery level - just to demonstrate the concept of broadcasting. The broadcasting is set up in the event loop as follows:

Here is where the actual broadcasting is done - in loop():

For testing our BLE device, I used the excellent LightBlue app on my iPhone 5. There are plenty of BLE scanner apps vailable for other platforms - make sure you pick one that can listen to BLE notifications and read advertisement data. The images below show the interaction of our device with the app.

When the app starts, we will see our BLE device listed on it, and we can see the services supported, as well as start listening for notifications.

When playing around with BLE, if you find that your old GATT settings are not going away in your mobile app, restart bluetooth on the phone. (This happens due to GATT caching, as I learned painfully.)

All source files for this project can be found at my github page.

By constructing a BLE IoT contraption that transmits temperature and battery levels, we have touched on the Device part of the IoT triad. In the next part, we will look at the Mobile part - creating a cross platform mobile application that will speak to our Device.