I am slightly (just a teeny bit, I assure you) obsessed with my desk drawer and the arrangement of the contents therein. When I am in dire need of my Kuru Toga pencil (sketch emergency) or my Alaskan knife (bear emergency), my hand knows where to find it - even in the murky darkness of an all-too-common Bengaluru power outage. Since my desk drawer remains the only place at home where sightings of scotch tape, a pair of scissors, or a pen that actually writes - is guaranteed, this sacred space is frequently violated. The marauders who purloin such precious artifacts vary in ages 3 to 74. I’ve been threatening to do something about it for a while, and now the time has come to unleash the power of ESP8266 and IFTTT on this situation.

The goal of the project is as follows:

When my desk draw is opened, I want a buzzer to sound, and want to get an alert on my mobile phone. I also want the circuit to consume minimal power.

Since it’s for home use, I decided to use ESP8266 for this project. I had a Sparkfun ESP8266 Thing Dev board lying around, and this seemed like the perfect excuse to try it out. For mobile alerts, I am using the IFTTT (If This Then That) service. Let’s look at the design.

The first thing we need is a way of detecting when the desk drawer is opened. Since it’s pitch dark inside a closed drawer, and there’s some ambient light when it opens, an LDR seemed like a decent idea. Since one of the design goals is to reduce battery consumption, the ESP8266 needs to be in deep sleep most of the time. I checked out the “light sleep” and gpio pin wakeup options for ESP8266, but I finally went for the “deep sleep” option, but that requires a LOW pulse to be sent to the RESET pin. The final circuit I have used is based on the nice work by GitHub user chaeplin. 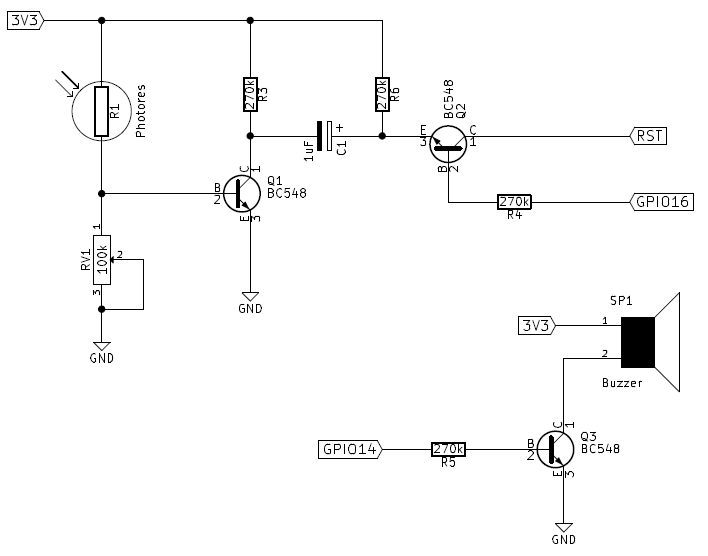 Here’s how the above circuit works. When the LDR is in the dark, Q1 is Off. As it comes to light, LDR resistance drops, Q1 gets turns on, generating a HIGH to LOW pulse at its collector output. This grounds C1, and as it charges via R6, it generates a HIGH-LOW-HIGH pulse at RESET, causing the ESP8266 to reset and wake up. Q2 ensures that this reset happens only when ESP8266 is in deep sleep, at which point GPIO16 is pulled HIGH, which turns Q2 ON and allows the reset to happen.

The second signal is the output at the collector of Q1 and the first signal, at the RESET line. You can see how a HIGH to LOW transition is converted to a negative pulse.

Note that you will need to adjust the potentiometer to set the threshold at which Q1 turns on. This will vary with the type of LDR and light levels in your room.

In addition, we need to drive the buzzer for which I am using another BC548 transistor.

And here’s a close-up of the power supply. It’s a cheap LiPo charger I got from ebay, and I am using it with a 600 mAh LiPo battery. 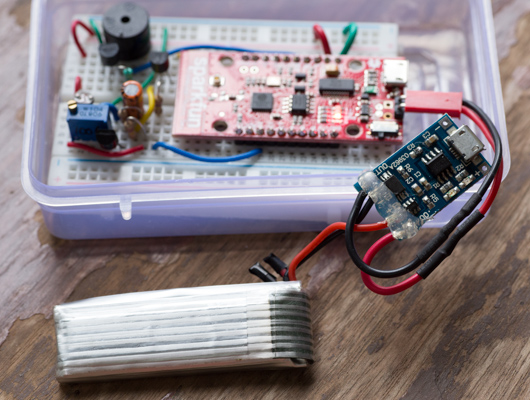 The battery (also cheap) had the wrong connectors, and the charger had none, so I had to do some soldering and hot gluing. But it worked, and I can charge this battery periodically via USB. It even has charging indicator LEDs.

Next, we need to setup IFTTT.

To get mobile alerts, I decided to use IFTTT’s Maker channel service. I created a recipe which sends a “desk_drawer_open” notification. Look at How to Trigger Events in the IFTTT website to understand how these events are sent. To create recipes and receive notifications, you need to sign up with IFTTT and download their IF mobile app.

To keep life simple, I just bread-boarded my circuit, and put it in a transparent plastic box. 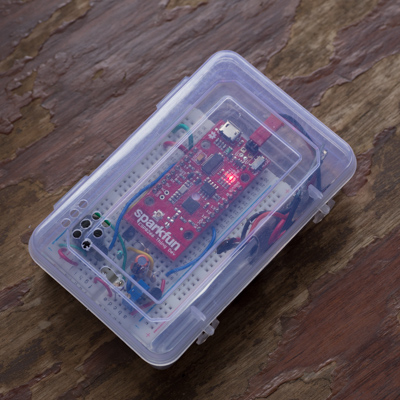 Now, on to the code.

To start with, you need to create a file called mysettings.h and put it inside your Arduino project directory. Here’s what it should look like:

(For the curious, this design is to avoid accidental check-ins that will announce your WiFi and other credentials to the planet at large. Just put mysettings.h in your .gitignore and you’re set.)

Modify the above with your WiFi SSID, password, and your IFTTT Maker key.

Now, let’s look at initHardware() which sets up the pins:

Above, we set up output pins for the LED and the buzzer. Note that for the Sparkfun ESP8266 Thing, the LED turns ON when you send GPIO5 a LOW signal because of the way the LED is connected. You may need to switch HIGH/LOW to match the ESP8266 board you are using.

Here’s the code that connects the ESP8266 to your WiFi network. This is mostly from the Sparkfun tutorial for the ESP8266 Thing.

In the above code, we make 10 attempts to connect to WiFi before giving up.

Now let’s look at the code that posts the alert to IFTTT.

The POST request is already prepared into a string in setup():

Above, we use the WiFiClient object to make a POST using the string we already prepared. The result from the server is read back above, but that’s only needed for debugging.

Now, it’s time to make some noise. Here’s the code that sounds the buzzer.

Above, we use analogWrite() to send a PWM signal to the pin. The note sequence E6/F6 might found familiar - it’s the minor second interval used in the thematic music for the Jaws movie. Note that the loudness of the buzzer varies with the frequency. I did not have a datasheet for my cheap buzzer, but you should try to look at the frequency response curves for yours.

And finally, here’s loop() where the action happens:

As soon as we enter, we flash the LED once, make some noises, and post an alert to IFTTT. And then we are off to deep sleep. Whenever the ESP8266 is reset due to the LDR coming to light, this loop will be executed once, thus sounding the buzzer and sending the mobile alert. The yield() calls above are important, since they allow the ESP8266 to perform background tasks.

That’s about it. Next time an unsuspecting invader opens my desk drawer, they will be greeted with threatening music from Jaws, and I will get an alert on my mobile phone. MUHUHUHUA!