Getting Started with Atmel ATtiny10 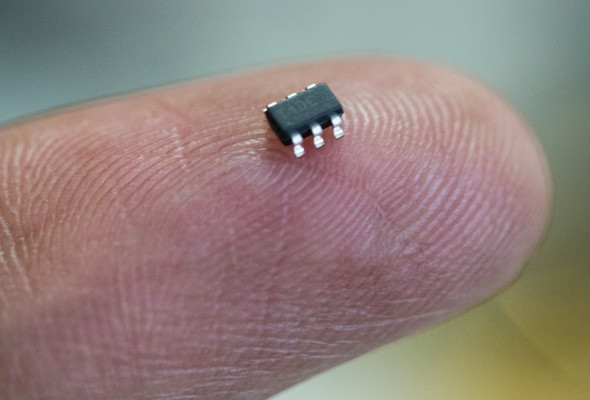 I like Atmel tinyAVRs because they are tiny computers that I can (almost) wrap my head around. The Atmel ATtiny4/5/9/10 are the cheapest in the tinyAVR line, and they come in two packages - SOT23 pictured above, and an even more stupendously small 2mm x 2mm USON package. This article will talk about programming these little chips. Though they may be tiny, they are still quite capable, and the right choice for many projects.

I’ve written about tinyAVRs before, and you can take a look at some of the articles before to get a feel for them.

One fundamental difference in programming ATtiny10 versus the above is that the former requires TPI (Tiny Programming Interface), which we will explore below.

To keep things interesting, we will program the ATtiny10 to drive a common cathode RGB LED. Here’s the schematic:

Above, you can see that the R, G and B leads of the LED are connected to PB0, PB1 and PB2 pins of the ATtiny10. You can also see the connections for the Tiny Programming Interface, which makes use of three signals - TPICLK, TPIDATA and RESET. The traditional MOSI in not connected. The pins are arranged in an indentical order to the standard 2x3 ICSP header. Another thing to remember is that TPI requires a 5V signal - 3.3V won’t cut it. (But after programming, your circuit can run at a lower voltage.) 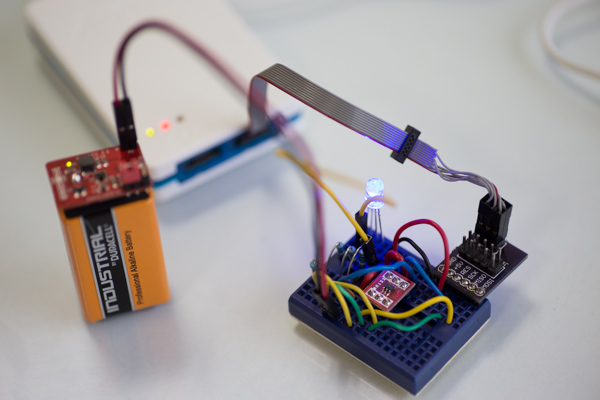 I used an SOT23 to DIP adapter above so I could use the chip on a breadboard. To plugin the Atmel ICE 2x3 header on a breadboard easily, I used a handy AVR ISP adapter PCB - an open source design you can order from OSH Park.

I have written before on using Atmel Studio 7 and ICE for programming tinyAVRs. The setup is similar here, except that we need to use TPI as the programming interface. Once the project is setup and compiled, here’s what the device programming settings look like: 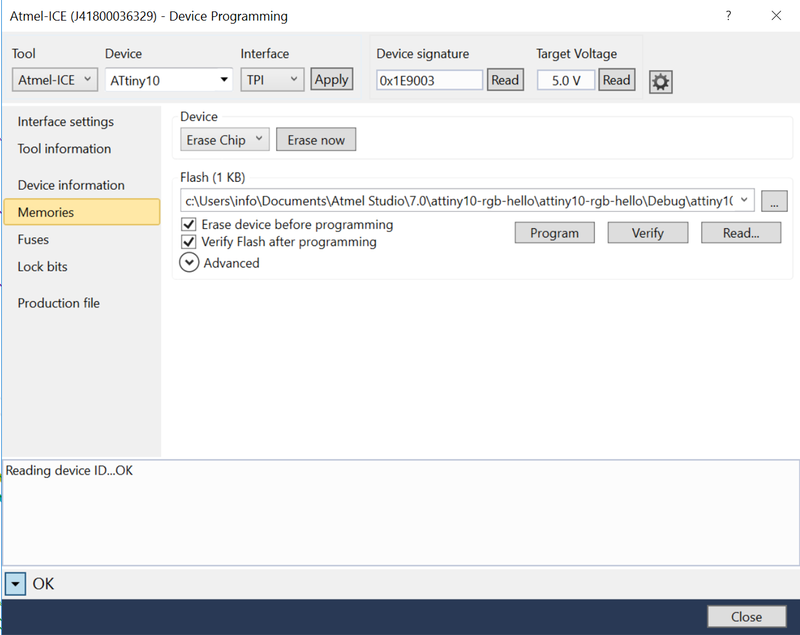 As you can see above, the interface is TPI and the target voltage is read in as 5V, and the signature 0x1E9003 matches that of ATtiny10 from the datasheet. Use the Program option under Memories to upload the code, and you’re done.

I’ll say it again: The combination of Atmel Studio 7 and ICE is a fabulous toolset for programing Atmel microcontrollers. A long term Mac user, I was so impressed by this combination that I bit the bullet, took a pickaexe to my frozen wallet, and broke out the hard cash to buy myself a license of Windows 10 (ugh) and Parallels (wow), so I could use these tools from the comfort of my Macbook and OS X. I wish that Atmel Studio was cross platform, but then I also wish that the Aliens land soon. I ain’t holding my breath for either.

The RGB LED connections interfere with TPI programming. So you need to disconnect the LED (just pull the ground) during programming.

I wanted to explore a cheaper option than Atmel ICE for programming the ATtiny10. I found some evidence (How is your Polish?) on the web that the cheap USB ASP programmer can be made to support TPI. But so far, I haven’t been able to make it work. I’ll update this section if I manage to do it.

In my view, it’s better to buy an Atmel ICE if you are working with their chips. They offer just the PCB for USD 35 if you are on a budget, and are brave enough to make your own cables.

The first thing you want to set is the clock speed. The ATtiny10 doesn’t have any fuses related to that, so you need to set that in the CLKPS register. The default is a prescaler of 8 which puts it at 1 MHz, but we want to run it at 8 MHz.

In the code, you want to ensure that F_CPU is set to 8 MHz so calls like _delay_ms() work correctly.

The way we’re going to light up the RGB LED is to supply the correct PWM frequency to each channel, based on the colors. I’ve chosen these amazing colors for the LED, and they are stored in program memory as follows:

The PWM for each channel is set in an interrupt function (more on setup below), which turns the channels on/off based on an 8-bit PWM counter variable:

When the above function is called 256 times, we would have completed one cycle of the PWM. The interrupt is setup as follows:

In the above code (Yes, you need to read the datasheet!) we setup the 16-bit Timer0 of the ATtiny as follows:

In the main code, the LED color is changed at regular intervals as follows:

Here you can see the ATtiny10 in action, changing the colors of the RGB LED every second or so. (I put a tape on the LED because I was going blind staring at it all day.)