All Roads Lead to Shenzhen (for Electronics)

This is a brief account of my four day visit in January 2016 to Shenzhen, China. Due to my unfamiliarity with the language and brevity of the trip, this is only a superficial perspective. 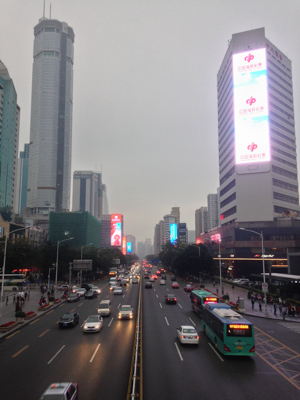 If you are doing anything related to electronics today, you will come to know about Shenzhen soon enough. In my case, snapVCC, a product that I succesfully crowd-funded recently, brought me here. Although it was not a requirement for me to be present here for production, I decided to make the trip to get a feel for the place - especially considering future projects.

Here’s a brief overview of the formalities involved in getting to Shenzhen - from an Indian point of view.

I applied for a visa through a travel agent in Bangalore, since the Chinese consulate is in Mumbai. The visa fee was INR 8000 (plus the travel agent charged a small fee). I applied for a business visa, and the only supporting docunent I needed was an invitation letter from Seeed Studio, the company that’s manufacturing my product in Shenzhen. I got the visa in hand in about a week - a single entry visa valid for three months.

When I asked around, I was advised to fly to Hong Kong and take ground transportation rather than fly directly to Shenzhen. Ticket prices from Bangalore to Shenzhen ranged from around INR 25000 to 35000, depending on airlines, dates and stop-overs. I opted for a direct flight - a five hour journey. I think you can do it on the cheap if you don’t mind breaking your journey and are flexible with dates.

The currency in China is Chinese Yuan (CNY), but it’s more commonly referred to with its older name RMB. A quick approximate conversion to INR is to just multiply CNY by 10. I took USD from India and converted it in Hong Kong. The conversion rate of Hong Kong Dollar to INR is about 7.5 at the moment.

Immigration at Hong Kong was straightforward. I just needed to fill a form, and there was no visa as such for short visits from India. I then collected my luggage and followed the “transport to mainland” signs. I opted for a “limo service” which is actually a shared taxi. I had my Shenzhen hotel address printed in Chinese characters (using google Translate), so all I had to is point to it, and pay 200 HKD at the counter. They slapped a sticker on to my jacket (which probably said “illiterate man”) and I was handed over to an attendant who shooed me towards the taxi gates. From then on, I was in “point and sign” mode. 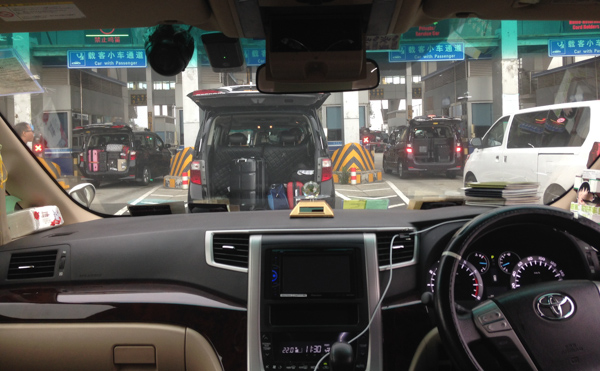 The “limo” was actually a van which takes a driver plus seven passengers. I was wedged between two passengers in the middle row. After my initial bewildrement, I had a nice conversation (in English) with the fellow to my left - an Engineer from Taiwan who worked for Foxconn. The driver provided us with yellow immigration forms to fill, and in less than hour, we were at the border. We first passed through the Hong Kong gates, and then the Chinese gates. In both cases, we did not need to get out of the car. The officers just inspected out passports and peered into the car which had the interiors lighst on and the doors open. The taxis all had their trunks open, but in our case atleast, there was no inspection. Once we crossed the Chinese border, the taxi went into a mall where passengers were switched to other cars based on their Shenzhen destinations. In another 20 minutes, I was dropped off at my hotel.

I wanted to stay close to the electronics markets, and I (mostly by accident) ended up choosing the Shenzhen Shanghai Hotel, which was at a walking distance to the Huaqiangbei markets. The cost of the room was about 500 RMB per night, which did not include a meal plan. My room was nice and cozy and the service in general was good. The buffet breakfast was atrociously bad, though. Definitely not worth the 75 RMB charge.

Shenzhen is one of China’s first Special Economic Zones set up in the 1980s and has grown to become the world’s destination for electronics manufacturing. Shenzhen is a huge city, and I visited only parts of Futian, Nanshan, and Luohu districts during my stay. 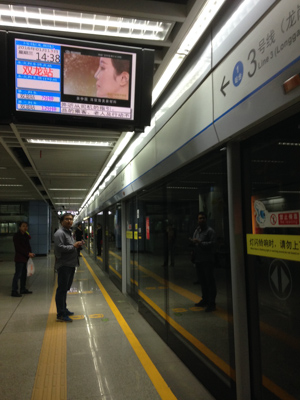 You can get around Shenzhen in a taxi, but using the metro or bus is much cheaper. I used the metro, and found it to be very convenient. You can buy subway tokens at all stations, and the main menu has an English option which you can use. The machines I saw accepted only 5 Yuan notes or coins. A better option (which I plan to try next time) is to buy a Shenzhen Tong Card - a prepaid card that be used for both the bus and the metro. If you do take a taxi, ask for a fa-piao - a “tax receipt” - this apparently reduces the chance that you will be overcharged for the trip.

Being a vegetarian (not vegan) my expectation was that I was screwed in China as far food goes. But this was actually not the case. 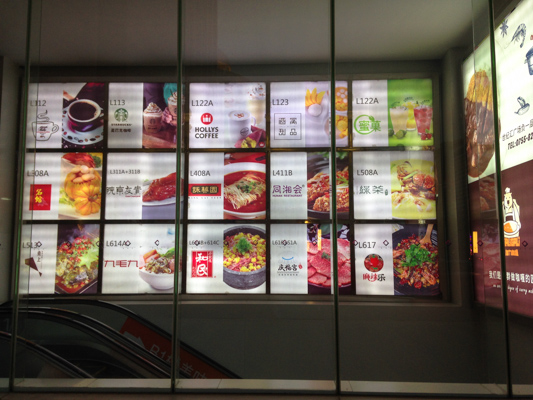 As long as I was with someone who could speak Mandarin, I got excellent vegetarian food. Left to myself, I exercised my pathetic point and mime skills, and usually ended up with weird stuff like tentacles on noodles. But even then I was always able to drown my (temporary) sorrow in a bottle of Tsingtao and some fried Tofu. I had learned the phrases wo chi su (I eat vegetables.) and wo bu chi roe (I don’t eat meat.) - but Chinese language is tonal which meant that most of the time people just stared at my (apparent) gibberish, and I beat a hasty retreat to sign language.

As I was preparing for the trip, one of my friends who had travelled in China remarked - “you will get to experience what illiteracy means”. It’s not just that I was in a place where I didn’t know the local language - I had travelled in Thailand, Cambodia and Indonesia. But those were tourist friendly destinations where it was easy to find someone who spoke English. But in Shezhen, the isolation was complete. I had no idea what I was looking at - almost all shop signs were in Chinese, and hardly anyone spoke English.

Technology can help, Pleco is an app I found to be useful - it provides an off-line translation from English to Chinese, including pronunciation. But this app can be confusing as well. A given English word can have multiple translations and most may make no sense for your particular situation.You can also use google to translate the Chinese characters. I am sure there’s plenty of other software you could use to do similar things.

One useful thing to learn (thanks Charles, for teaching me) is Chinese hand gestures for numbers:

By the way, Shenzhen is pronounced more like shen-jen rather than shen-zen.

During my trip, I found the Chinese people to be friendly and Shenzhen streets to be safe. I routinely walked a couple of kilometers back to the hotel late at night, and I faced no problems whatsoever. Every few blocks, I saw Police kiosks and a uniformed officer. The streets were so brightly lit at some places that it felt like daylight at 11:30 PM.

As you might have heard, a lot of the internet that you take for granted (Facebook, Twitter, Google services, etc.) are blocked in China. But almost everyone I met used VPN software, so it’s important to set one up before making the trip. Another idea is to get a SIM from Hong Kong for your phone, have in on roaming, and you have unfiltered internet on your phone in Shenzhen for the duration of your trip.

The primary purpose of my trip was to be at Seeed Studio in time for the production of snapVCC. 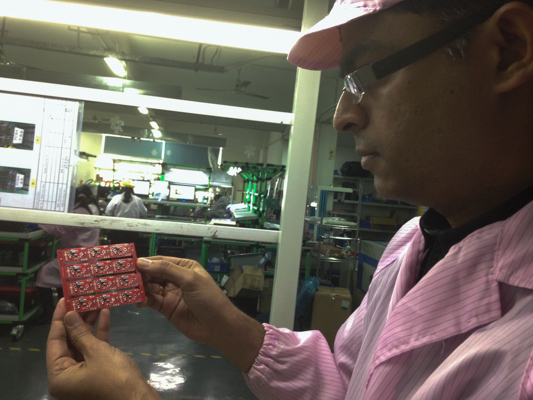 Seeed is in Xili, which was a 40 minute ride by taxi from my hotel, and cost about 80 RMB. I won’t go into details of my Seeed visit here, except to say that they are a great bunch of people, and that I was very happy to be present to see the first pieces of snapVCC come out of production.

One of the big attractions of Shenzhen is the Haquiangbei (HQB) electronics market. For folks from Bangalore, think of it as \((S.P.Road)^N\) where \(N\) is a very large number. A good guide to this area is the Shenzhen Map for Makers created by Seeed Studio, the PDF for which is available free online. When I was in town they also gave me a printed copy, which was very handy. 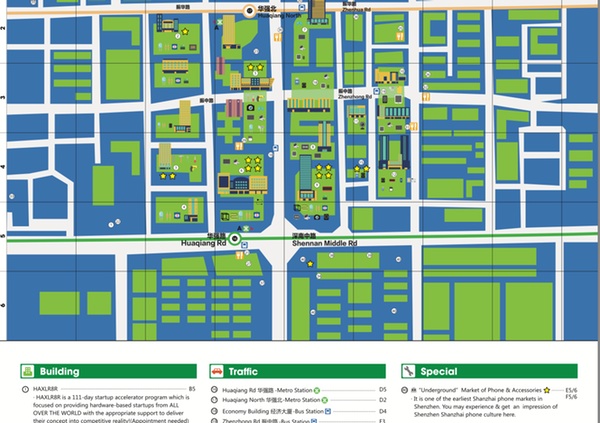 You can think of HQB as a big spread of multi-storied malls densely packed with shops selling all kinds of electronics - right from discrete components to fully assembled computers. There are zones for specific components - power supplies or motors, for instance. The most impressive sight in that area is the 70+ storied SEG building, the first 8 floors of which consist of electronics markets, and the rest filled with restaurants, offices and such. It was so tall that I could used the building as a marker to orient myself as I walked around it that area. 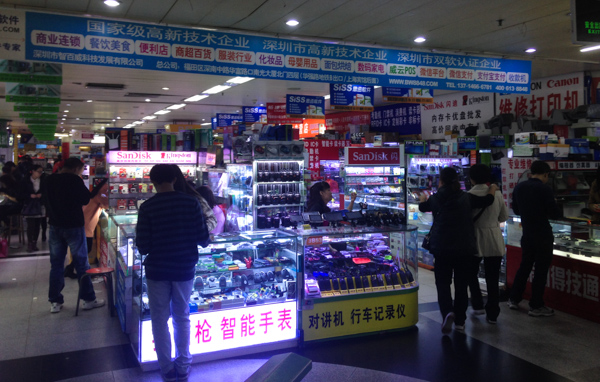 One interesting sight outside HQB malls is stalls selling remote controlled drones. These can be as cheap as 100 RMB. It’s great fun to watch the sellers fly these things - they can make them shoot up to the sky and do all kinds of crazy maneuvers. Added to this is their sales pitch. My seller stood on top of a drone to demonstrate its crash recoverability. So of course I bought one.

Looking at HQB, you understand why so many companies from the west have operations here. Need a reel of MOSFETs for your assembly line? No problem - just walk to HQB and get one. It’s like buying vegetables in a supermarket.

I was in touch with Ian (of Dangerous Prototypes fame) who has his base in Shenzhen now. He was kind enough to connect me with his HQB hacker group on WeChat. Every evening we hung out in the HQB area and I great fun speaking to folks from US, Germany, Australia and other places who were using the Shenzhen infrastructure to work on their projects. 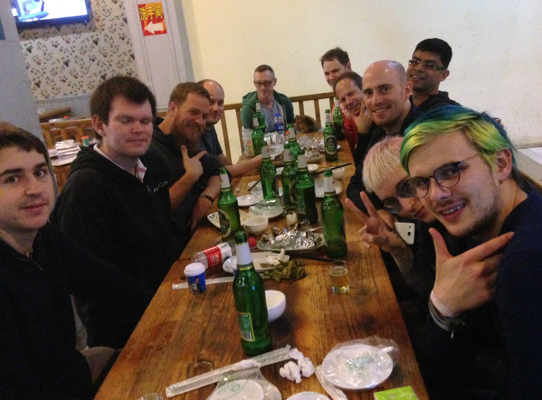 If you are in the HQB area, I’d be happy to put you in touch with Ian’s group.

Although most folks come to Shenzhen for electronics, the place offers plenty of sightseeing opportunites as well. One place I visited is the Dafen oil painting village, where I purchased a couple of paintings by local artists. 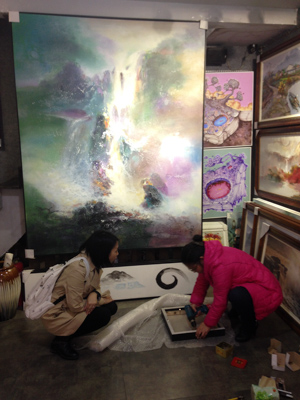 I wanted to visit the Fairly Lake botanical gardens, but didn’t have time. It’s supposed to be one of the most beautful parks in China. Do check the wikitravel guide to Shenzhen for other suggestions.

Although my trip was short, a visit to Shenzhen gave me a much clearer picture of its electronics manufacturing infrastructure. I hope to leverage my knowledge and contacts for future projects. Looking forward to my next visit!